skip to main | skip to sidebar
My journey to reversing diabetes and poor health caused by a lifetime of bad habits by me 'going green'. This journal depicts the ongoing trials and tribulations of a meat and potatoes raised kid from the mean streets of fast foodville to the optimal health highway en route to elder village by way of veganism.

This is my own personal Herban Renewal plan

An Ode To A Lollipop

To be honest, there isn't anything that damn interesting going on right now to actually speak on. To be perfectly honest, right now my health is the most important thing for me, and to be completely honest I'm failing in that department. But don't worry, the Creator has a master plan, so I'm fine.

I do find it peculiar that the same folks that defended Dear Leader are the ones tearing him down right now. As a former member of the intelligence community, I totally overstand what has been done, why and why it is to be this way. Shame, the same folk that needed a long form birth certificate were dancing in the streets after a death announcement, just like their so-called enemy.

I also have complete and utter doubt in supporters of our Dear Leader. The time for gossip, rumors and innuendo are over. I am ashamed to even have affiliation with those that live on hearsay when we live in the 24 hour news cycle as well as having access to bloggers, You Tubers and the like as close as their always-on cell phones to get real and pertinent info... They doubt the individual and blindly follow the news agencies.

Sheeple. That's what they are.

I've even seen a fake-ass Martin Luther King quote go round the email, Facebook and even the Blogger circuit. Everybody seems to be an expert because they have a Twitter account. It's funny, those closest to me never even asked my opinion, AND I WAS OVER THERE!!! I conducted background investigations and processed info to have DoD grant security clearances to those worthy of our nation's trust. That's all I can say. Those in my circle know that I've seen shit. On purpose. They don't have to know what and I'll never say, but do know this: Most of the stuff y'all think you know you never will.

And that info still ain't going to help you get a better job.
It has nothing to do with oil speculation overcharging by OPEC for fossil fuel
You've been so distracted that prices for processed foods are equal or exceed that of organic
Foreclosures are still happening because the rent is TOO DAMN HIGH!

These happenings aren't meant to be distractions. The current administration has a job to do. Don't let the rumors of rumors keep your attention away from what's really going on. Or birth certificates. Or who demands them. I feel like one of the few out there actually focusing on what really matters. I should feel shame and disgust for those that waste their time on non-essential things. I'll just wait until my people have that 'aha' moment and realize while they were in a daze where their time, effort, emotions and money went.

Your kids need you.
Your mama is calling.
Your health, wealth and knowledge of self is wavering.

And your ass is worried about long form birth certificates and the status of a dead man.

Suckers.
Posted by The Brown Blogger at 2:03 AM No comments:

Filmed at the Tree of Life Rejuvenation Center in Patagonia, Arizona, this courageous reality film documents the trials and successes of a group of everyday Americans who experience the healing results of 30 days of raw, living foods.
Posted by The Brown Blogger at 12:11 PM 1 comment:

I haven't forgotten about this blog. I'm working on getting me to work on getting to this forum on a very regular basis. When I work on it.

Funny, I actually am suffering from a kidney infection at the moment. It's been hard to juggle clean eating, work and extra-curricular activities the past couple of weeks. I have read and studied and had a sitting consult with a Holistic Health Practitioner. There is a lot to do.

Because of how I came down with the kidney infection (e coli - lettuce - nationally known sandwich shop chain... Led to urinary tract infection), I have to detox, fast and hit the greens in my juice feasting. I wasn't ready to do it so soon, but now in order to get rid of the ickies, I gotta juice and detox so I won't get any sicker.

I've lost about 10 pounds, can't sleep and my lower back (in that area) is on fire. The pain has subsided over the last 4 or 5 days due to horsetail and dandelion root among other herbs, and my blood sugars have been lower because of reduced food intake. I plan on going on a 21 day full body detox courtesy of D Herbs, and I'll roll that into a kidney and liver cleanse. My mental clarity has gotten a bit better due to the reduced starch intake. Other than the kidney pain, I'm fine.

I'm in 2 belt notches and am angry with myself that I bought a new belt 2 weeks ago.

The juicer comes out this weekend in full force.

A dear friend and sister is actually sending me some herbal kick-ass concoctions this weekend to help cleanse and heal the kidneys and liver as well as help alleviate diabetic symptoms.

I'm going to steam and soak in the coming days.

If this is a part of the healing crisis, then I really want to get the rest of the bad stuff over with.

Google and research Dr. Gabriel Cousins and his Tree Of Life center in Arizona. I'm thinking about going there later on this year.

Y'all be easy now, mmmmkaaay?
Posted by The Brown Blogger at 12:28 PM 2 comments:

My name is Hassan.
I am a city kid, raised in a traditional black family loving family get-togethers and holidays because my people can get down when it comes to whipping up some soul food.
Cheeseburgers were my favorite thing when I was a kid.
I fell madly in love with fried chicken after I left for the military in the late eighties. I mean, Uncle Sam put me on a plane to some of the best fried chicken spots in the world, sometimes I think on purpose! I exited the military in 1993 at 225 pounds with less than 12% bodyfat. Damn, I remember what that felt like! Haven't felt it in over 17 years.
I drank heavily going into the Army and by the time I got out, I was probably swigging down about a half gallon of hard liquor daily in order to cope with stuff. I had no idea I was out of control until I got a job with the phone company and couldn't function in the mornings without at least a few ounces of the good stuff. I was asked if I had a problem and denied it. Because I didn't accept the fact that I was an alcoholic the union couldn't save my job.
I ate even more in order to cope. I also got another job, this time it was a desk job and I got more money at that! Oh great, now I can sit on my ass and eat when I'm not sitting. I kind of kept up this behavior until December of 98.
I slipped and fell... HARD.
I ended up in a hospital, going in and out of diabetic shock weighing more than 460 pounds. I was taking a whole CC of insulin at the time. I was also told that I could continue to eat the same foods, but not as much, and that the insulin I was now injecting would handle the massive amounts of glucose my overeating caused. I stuck with that train of thought until I took some diabetes education classes over at the VA hospital.
And then I learned about the power and values of food. I also learned that processed foods have a reversed set of values and without proper nutrition and exercise, I was destined to kill more than my pancreas.
So I lost weight. I started to eat right. I started working out. I even dated a personal trainer some time later and tapped her for as much info that I could. I ended up losing more than 200 pounds.
But I still ate high fat, processed and unhealthy foods. I still drank and I picked up a nasty little cigar habit once I got small. Back in 2000, I got 'conscious', changed my name and started to do little things to help my health. I was no longer on insulin and I looked and felt normal... Or so I thought.
Let's fast forward to now, 2010. In the past decade I have had various surgeries to repair damaged knees and ankles, 2 hernia repairs and the damage from unhealthy eating and tobacco use had taken its toll. I found out this past December that I had high blood pressure and I thought it was stress... It was my kidneys. By ingesting too many animal fats and proteins I kind of clogged myself up. Pancreas no longer functioning properly and now my kidneys.
I started educating myself in holistic health in 2008 and realized from my test results that I on the brink and am not too far gone to be saved... I can restore my health! It will take time and more sacrifice than most of you will never know. The only way I can get to optimal health in my current state is to totally REVERSE everything I've done nutritionally. I have to do certain things I should be accustomed to but am not in order to live. I will acclimate.
I gotta go green.
So this journal will be my food diary of sorts. I'll try my best to document my journey to vegetarianism and eventually to veganism by writing about how I'm to do what I need to do. This is my life on the line here. I'm going to be as honest as I can in expressing how the fasting, juicing and meal planning goes. I'm also going to share test results and conversations had with my medical staff and my naturopath.
I'm also completing courses and taking classes in an attempt to become both a master herbalist and holistic health practitioner. I promised a dying friend last year that I would complete the classes and help those that need the vital knowledge that you can eat to live. Going green can enhance life and help us rid ourselves of dis-ease. I now have to live up to that promise by living myself. I also have to lead by example by going green myself, 'traditional medicine' be damned. This will be my testimony.
Posted by The Green Blogger at 12:15 PM 3 comments: 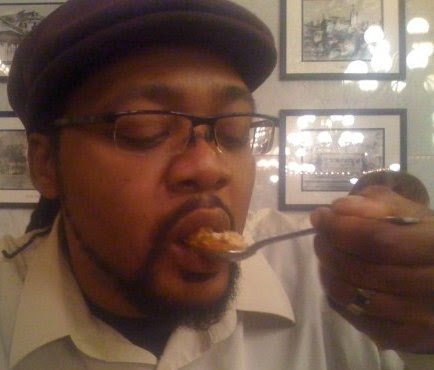 the newly reformed and formerly evil, always-hungry alter ego of The Brown Blogger